Because you'll learn to be a better man, a better husband, father, brother, worker, and friend. You'll meet men of a variety of ages, religions, ethnic and cultural backgrounds you might otherwise have never met.

Over the last four centuries, Freemasonry has flourished during times of great enlightenment and change. It is no coincidence that Freemasonry rose to prominence during the Age of Enlightenment in both Europe and America - where a new generation believed it could develop methods to foster personal improvement, bring order to society, and understand the whole universe. This sentiment is perhaps even stronger today than it was in the 18th century.

Today, men seek out Masonry for the same reasons - to better themselves and improve society in the company of like-minded Brothers. Like the building of any great structure, the powerful metaphors and symbols of Masonry are used to build character - one principle at a time.

Freemasonry has had a long and fascinating history, but at its core are men devoted to the ideals of learning, self-improvement, brotherly love and relief to those who most need it. 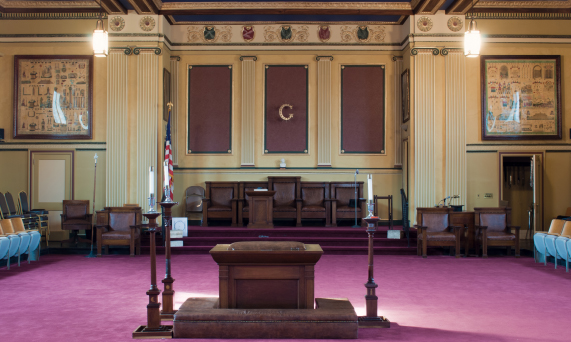 Men usually seek out a Lodge near their home or workplace or ask a Mason they know to recommend a Lodge to them. We believe that Lafayette Lodge No. 27 is very special and members come from all over the New Jersey area to belong here. We are brothers from various continents, men of many nations, religions, and professions.

Dues notices for 2019 have been sent out.

Lafayette Lodge No. 27 F&AM has decided to temporarily suspend all new private rentals of our banquet halls.

We greatly appreciate your interest in our facilities and apologize for any inconvenience.

If you have an existing rental agreement, that rental is still valid.

Thank you for your understanding.